A recent clinical study confirms the efficacy of ENDOCARE RADIANCE C Oil-free Vials, of CANTABRIA LABS, to significantly accelerate recovery of damaged skin post laser treatment. In addition, it has been shown to increase tolerance to treatment and improve anti-ageing results. The results were presented and awarded for its poster at the last Congress of the SEME (Sociedad Española de Medicina Estética – Spanish Society of Aesthetic Medicine) held in Malaga on February 20 to 22.

Laser facial treatments are among the most demanded anti-aging procedures in dermatology and aesthetic medicine consultations (3). Despite being minimally invasive they do have a number of adverse side effects such as erythema, burning sensation or tightness, the severity of which depends on the type of treatment performed, being more severe in the case of ablatives than non-ablatives. For this reason, it is essential for patients to find suitable topical adjuvant therapy.

TRIPLE EFFICACY AFTER ABLATIVE FRACTIONAL LASER
The effectiveness of SCA® Growth Factor Technology, Cryptomphalus aspersa secretion – present in the ENDOCARE range – when used after a non-ablative fractional laser protocol, has been proven in previous studies. The new study shows that the application of a cosmetic regime based on SCA® Growth Factor Technology, such as ENDOCARE RADIANCE C Oil-free vials, with 40% concentration of this ingredient, improves skin tolerance and recovery after CO2 ablative fractional laser treatment.

During the study carried out in 10 patients, these vials were applied to half of each patient’s face immediately after the procedure and during the subsequent 21 days, while vials without SCA® Growth Factor Technology were applied to the other half of the face. The results show that the application of ENDOCARE RADIANCE C Oil-free Vials after CO2 ablative laser therapy:

Accelerates recovery of ablative laser-induced damage to the skin. In fact, the results are remarkable and significant just after one week. This result is tested by observing the evolution of the density of the microcolumns (generated by the laser), in the part of the face treated with SCA® Growth Factor Technology. In this case, the microcolumns decrease and close faster than on the side without the active ingredient. It is also significant that transepidermal water loss is reduced on the side treated with SCA® Growth Factor Technology, which favours recovery of the barrier function. 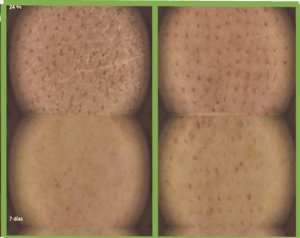 Significantly decreases adverse effects induced by the ablative laser. Improvement is observed in the degree of erythema, burning sensation and tightness.

Increases the tolerance and efficacy of laser treatment. ENDOCARE Radiance C Oil-free vials not only help in the preparation and recovery from the technique, but improves and optimises the results obtained: the roughness of the skin (anti-wrinkle efficacy) on the side treated with 40% SCA® Growth Factor Technology was significantly greater than on the side treated without SCA.

ON CRYPTOMPHALUS ASPERSA SECRETION (SCA® Growth Factor Technology)
In the mid-1990s, Cantabria Labs patented the process of obtaining this secretion, the effect of which results in repair and improvement of damaged and aged skin. Thus SCA® Growth Factor Technology was born, which regenerates damaged skin structures. This technology, which also promotes skin rejuvenation by reducing the number and depth of wrinkles and returning firmness and smoothness, is present in the ENDOCARE range. The concentration used in the study (40%) can be found at ENDOCARE Radiance C Oil-free vials.

In CANTABRIA LABS GROUP, we use our own cookies for technical purposes and third parties, to analyze web traffic or access to social networks. You can change the settings and get more information about cookies settings.

This website uses cookies so that we can provide you with the best user experience possible. Cookie information is stored in your browser and performs functions such as recognising you when you return to our website and helping our team to understand which sections of the website you find most interesting and useful.

Strictly Necessary Cookie should be enabled at all times so that we can save your preferences for cookie settings.

If you disable this cookie, we will not be able to save your preferences. This means that every time you visit this website you will need to enable or disable cookies again.

This website uses Google Analytics to collect anonymous information such as the number of visitors to the site, and the most popular pages.

Please enable Strictly Necessary Cookies first so that we can save your preferences!